These are the experiences of our volunteers in Sri Lanka.

A team of 5 eager volunteers headed to the school to finish off the final room in need of a fresh coat of paint. However, the air was no longer filled with the smell of gasoline, but the smell of a decomposing dog found at the back of the school! Thanks to Kristian, Kal, Suresh and the use of the children's slide, the dog was moved from the area. The lock was cut from the final room and the work began. As the furniture and pictures were moved from the walls many new friends were discovered, including hundreds of red ants, serval frogs and lizards, and a huge spider! Many screams were heard by the other team across the road painting at the temple! And it wasn't even tea time yet!

After these exciting events, the team was able to buckle down and get to work to finish the classroom in time. Everyone pitched in to put two coats of paint on the walls and put the room back in order before the end of the day! The front gate of the school was painted and so was the inside of the temple.

The school is now ready for the kids and teachers are returning on Monday. 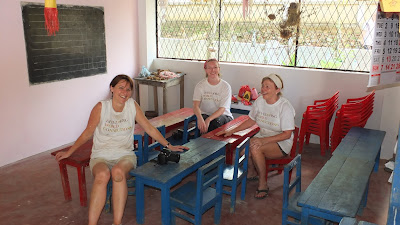 That night most of us joined Oneil to go on a tour of Tangalle and to see the harbour. The harbour was filled with beautiful colourful fishing boats that served as a great photo op. Oneil then took us to his home to meet his family and, of course, to eat! We then met Oneils father who is holding a ritual ceremony to commemorate the 2 year anniversary of his wife's passing.