These are the experiences of our volunteers in Nepal.

Today was our slowest day yet, everyone feeling the heat and the physical work from the last few days. It was muggier and more humid, likely on account of the rain from the night before. It also meant that everything was much clearer to see, less of a heat haze around the foothills. It is so interesting to see how the landscape changes slightly each day.

We got the chance to sit in on a mother's group meeting as well! And although we could not understand any of the exchange, it was fascinating to watch it work out, especially because they had to elect a president, VP, secretary and the like. The women were super modest about it at first, but one look of their faces when they were elected and even through the blushing laughter you could tell they were determined to make it work out for the best! 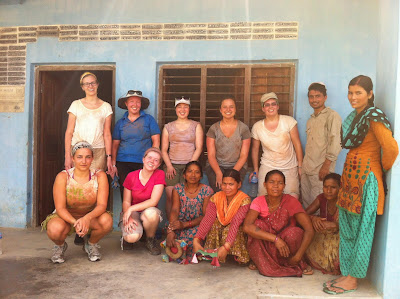 We returned earlier from the site and all of us took an afternoon nap. We are making great progress with the kids at work though: they are stopping by the classroom under construction, waiting shyly in doorways and then ducking away, getting braver and braver calling out hellos, which is wonderful!
Dinesh took us for a walk through the town of Lamahi, stopping in at a few shops to say hello, and ran into one of the school teachers in town. We enjoyed a nice cold Fanta/Pepsi/Mountain Dew on one shopkeeper's step, and by the time we left, we had acquired a circle of curious children and bystanders.
At dinner, there were literally so many bugs on the wall. It was hilarious to watch the geckos go crazy trying to eat them.
It's the little things that count.. ;)
Kelly Gerlings
DWC Student Team Leader
Nepal, May 2013
« Previous PostNext Post »