It's been a few days since a blog post because our team had a wonderful second weekend in Rwanda exploring the many rolling hills of the North West. They certainly call it the country of a thousand hills for a reason! The view during our many bus rides was breathtaking and frequently kept me from napping or reading.

We ended work early on Friday, and that worked out perfectly as it was the first morning we have had so far where we were limited in what we could do by persistent rains. We are still finishing up the plastering of some high walls of the building, but the rain slowed down that process. So instead we finished most of the painting that needed to be done. We are currently painting the metal for the roof with an anti-rusting solution that also happens to be an eye-catching bright red. 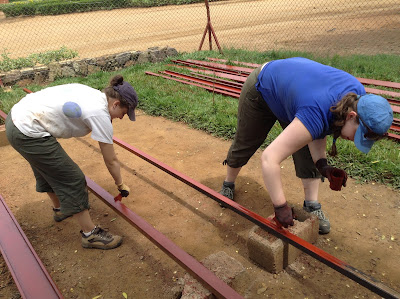 The bus ride from Gashora to Munsanze was bumpy and cramped, but it was also quite interesting. People in Rwanda are so friendly that we had many conversations with other bus riders in English, French, and some simple Kinyarwandan. Children waved at us from the side of the road too -- everyone wants to say hello not only because it is a friendly culture but also because Western visitors are still quite rare here.

After a fantastic dinner at our hotel most of the team went out dancing with local university students and stayed out super late - but not by Rwandan standards! 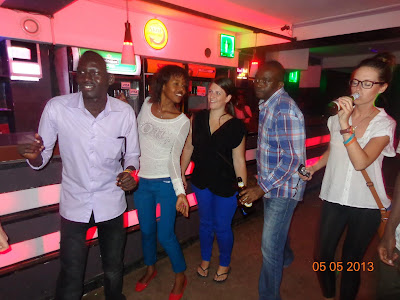 The next morning we went up a winding mountain road to visit a Twa cultural village that reminded me a bit of Black Creek Pioneer Village in Toronto. The really cool thing is that this village is at the base of the mountain that hikers take to visit some of the last Silverback Mountain Gorillas in the world. Although we couldn't afford the permit cost to visit them ourselves, being so close to their home was super cool.

My favourite part of the cultural village was probably the target practice where several members of our team tried to shoot a target with a traditional bow and wooden arrow. It's harder than it looks! I can only imagine how much harder it would be as a moving target (an animal). The Twa people have since shifted from a hunter gatherer society to an agricultural one, mostly in an effort to protect Rwanda's environment and endangered species - but they also sell beautiful carved wooden items and woven baskets similar to those at Covaga. Shopping this way is simply the best. I also quite enjoyed the dancing and drumming at the end of the visit, which we all participated in.

Saturday evening and Sunday morning were spent by the shores of Lake Kivu - so beautiful! We saw the prettiest sunset followed by a stunning light show of lighting in the distant mountains. Lake Kivu is absolutely huge -- very comparable to our Canadian Great Lakes at least from the biased vantage point of our hotel.

Everyone we speak to asks us to go back to our country as ambassadors for them, sharing with others how beautiful and peaceful it is to travel to Rwanda. And that we will! Many of us are already thinking of ways to come back again in the future. It's so unfortunate that most of the world still views Rwanda as a frozen image of its past when things have changed so very much in the past 19 years. On our bus rides I noticed several different Genocide memorials. They are in many towns and cities, so it is always remembered even as the country moves forward and leads the way in gender equality and environmental stewardship.