I'm writing this post by the lake as the sun sets, after a laid back day of work at Covaga.

This weekend was incredible! We woke up at 4am on Saturday, packed sandwiches, and waited for our safari jeep to arrive so that we could go to Akagera National Park. We went to the park with Cedric (who is one of the university students that has been helping and guiding us on the construction site and off), and one of the Covaga ladies, Anastasia. The drive to the park was long and bumpy, but the view as the sun peaked out of the hills was absolutely gorgeous. 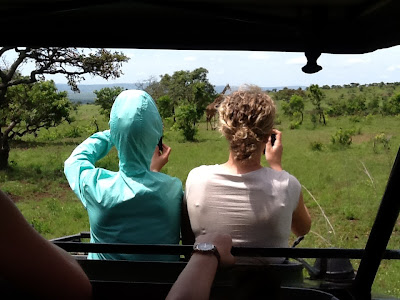 Akagera is very different from the rest of what we have seen in Rwanda. Instead of lush, green hills and mountains Akagera boasts the plains and grasses that Africa is so well-known for. We spent the day driving through Akagera on small rough-cut roads. Our jeep opened at the top, making the ride both totally fun and perfect for picture-taking. We saw so many animals! They included antelope in several different parts of the park, topi (a kind of antelope), hippos, two giraffes, water bucks, zebra, monkeys, a crocodile, water buffalo, a fish eagle, and warthogs. At the end of the day we stopped at the park hotel to have a bite to eat and were super excited when a family of baboons walked right by us. Little did we know how smart these particular baboons are, however, and as we were taking out our cameras to get some great shots of them they ran forward and stole away our food! The ironic thing was that the main thing they took were bananas! Over-all it was an amazing day.

On Sunday we took a bus to a town about 45 minutes away from Gashora, where our construction "boss" Peter lives. Peter, Cedric, and the other university students were all there and hosted a lunch for us, with cassava bread taking centre stage. It was delicious!

After lunch we walked to the town's Genocide Memorial, which at the time had been a church that thousands of Tutsis hid in and around. During the Genocide the church became a site of mass massacre, so today it is a memorial that is filled with the clothes and bones of those who died. This visit was emotionally difficult for us all, but it was so important that we went so that we can truly be part of an international community that works in solidarity with Rwanda today while also never allowing ourselves to forget what occurred 19 years ago.

Sunday evening we went to Mayor's house and he hosted a dinner for us. Mayor oversaw last year's construction team the way that Peter does for this team. Dinner was followed by live music and dancing!

This week at Covaga we are slowly starting to put up the metal roof panels of the building. It's a slow process but it looks like it will be completed by Friday!