By 20:00 hours we were back in our lodgings in Bhinder after a full two days in Udaipur. (Udaipur was the setting for part of the movie the Best Exotic Marigold Hotel.) Our ladies were keen on shopping - particularly for linens, custom made clothes, saris, table cloths, etc. Even I got involved by having two dress shirts made overnight for me. Goodness knows when or where I'll have an occasion to wear them! Also went to what might be called an emporium selling all the ornaments of elephants, the various gods of Hinduism, brass works, pottery, etc We hired tuk-tuks to take us through the chaotic traffic to all these various places. At the open air market, I purchased 100 grams each of five spices including cumin, chilli, coriander, etc all for the price of 140 Rupees or say $2 CDN. Of course, the tuk-tuk guy takes us to such a place because he has a "friend" who just happens to sell what we think we need. 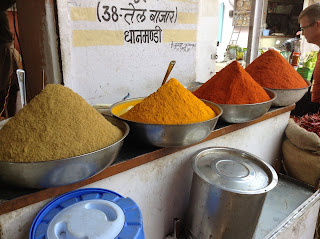 We also went to the summer palace of the royalty which is located high in the mountain overlooking Udaipur. The view was obscured by fog. They would go there to escape the upto 45C summer heat of their lake level palace. It's not lived in today and is more of a wildlife educational centre but it gives a stunning view of Udapur and the lake far below. Of course the Raj did not have to walk up there or carry all the needed supplies up there. Neither did we .... We took a car!
Some other thoughts:
Weather has been great with virtually not even a cloud around. This is the dry season after the monsoons finished in late September. The website says Udaipur had a high of 35C but it didn't seem that near the lake. At the work site 10 Kms south of Bhinder, I guess that it might be in the low thirties, with afternoon breeze and very low humidity. Towels dry quickly but you sweat accordingly as well as overnight lows might be 20ish.

Our project continues to take shape. The locals worked at least one day while we were in Udaipur. This morning there were far fewer people at the site as the kids are off school for this and next week. No day care programs here! As well, the Diwali festival is Nov 3rd so they are putting up decorations .... Similar to our Christmas. However, as a consequence, today there were lots of kids at the worksite - both boys and girls. They were wonderful and seemed to have some directive to watch but stay out of the way. They were in awe when I showed the pictures I had taken seconds before on the iPad.

GI tract health: On my previous backing trip to India in 1968, I took the loose bowel problem in stride - big strides and often too. It was similar for our team on the Peru project in 2011. Many missed one or more days with it. However, here in Bhinder things have been fine. That success is due to both the hotel and our Indian team leader have been most aware of our need for sanitary food and water. They ensure we only eat non contaminated food. In addition, it's bottled water for drinking, teeth brushing, and anything else that goes near the mouth. 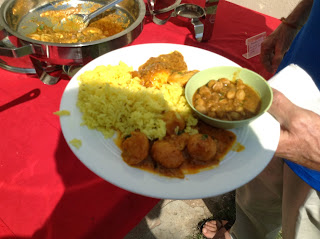 Finally, if you want to win the lottery, consider that you have already won the lottery just by being born in Canada! (And some other developed countries)
Wray McDonnell
DWC Participant
India, October 2013
« Previous PostNext Post »