Since my last update of December 1st, things around here have been very hectic. We finished getting the Aid Packs (AP) organized and headed up to Tabogon on Saturday, December 7th. A trip that was not without a few interesting moments: 2 over-packed trucks heading up on roads we might actually close in Canada, going “the back way” to avoid any road checks, a flat tire on the bigger truck causing a bit of a concern as there are no shoulders to pull off on so tire basically changed in the middle of the highway, last few kilometers actually more of a trail - not meant for 5 ton trucks to head down. But we finally made it to our drop off place at around 4pm. Just in time to get all of the 2 trucks unloaded and the APs all organized for distribution Sunday morning. 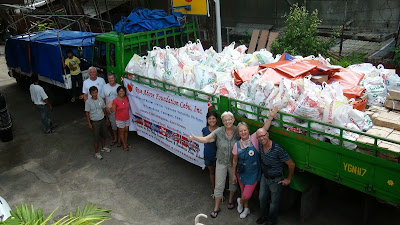 Another crew from Rise Above Foundation (RAF) came up early Sunday morning and after a quick coffee, we were ready to start the task of distributing the APs. Another 250 families were identified by Wilma, a local lady and Sally who’s place we stayed at, as the next most needy in the area. At about 8am we opened up the gate and all of the families moved towards the distribution area. Wilma had a list of all of the families and called each family one at a time in order to control the distribution. Not an easy task when you have families that have had very little since Yolanda’s devastation.

With only minor problems after we started, we managed to distribute all 250 APs by 10:30am. People were very thankful for our assistance and it was very hard at times to hold back tears as I watched the young and the old, the weak and the strong, struggle to carry their goods away. It was heartwarming to see those that could help those that couldn’t get things back to their homes.

A point of clarification, Tabogon is basically a region made up of many barangays (like our small towns and villages). We are basically helping two of the worst hit barangays in the area, Camoboan and Salag. All of the 325 APs were delivered were for families in these two barangays.

All of the volunteers except myself heading back to Cebu in the afternoon. I remained until Wednesday with the goal over the next 3 days to look for possible DWC projects, assess the full extent of the damage, and see how the chainsaw that RAF and I purchased was being utilized. I was supposed to be assisted by an architect, specializing in disaster relief assessment from the USA, but for some reason he was denied access into the Philippines so I was on my own.

Sunday night a game plan was decided on and early Monday morning I headed off on foot to visit the Camoboan Elementary School to assess the damage. The majority of the school rooms sustained some damage, but a separate building, which is their Home Economics Building, lost its entire roof. I talked to the principal and she told me that this building was well used prior to the typhoon - getting fixed would be wonderful. She also indicated that the other classrooms suffered water damage and do not have any screening left on the windows to keep the flies and mosquitoes out so getting it replaced was also important. They also lost their fence around the property; for safety and security reasons, this is another project that needs to be undertaken. The school also lost their outdoor stage. Not an urgent project, but something that would be a bonus if it got repaired.


After I returned, Sally and I headed out as passengers on 2 motorbikes into the hills of Camoboan. I didn’t realize that the damage I saw along the road into the barangay, while quite extensive, was no way near what I saw off the main road. The majority of homes we passed this morning were destroyed. A lot of people had only the blue tarps we distributed the day before over their heads as cover. It was an emotionally tiring morning listening to the stories many families shared with us about what they had lost and how they are coping now.

We headed back to base and in the afternoon we headed back on the bikes to go to another part of Camoboan. This time we went a little farther into the hills and the destruction was, if anything, even worse than we saw in the morning. Again, blue tarps were the main item seen throughout the landscape.

Tuesday morning we were up shortly after 5am to take a banka boat (a small catamaran fishing boat) over to Salag. Before Yolanda, we could have walked, but the suspension bridge that joined Camoboan and Salag was badly damaged by the typhoon so, without driving for at least an hour, a boat was our best option. We visited a high school and an elementary school - both which had sustained extensive damage. At the high school, classes were being held outside under tents. We walked underneath the tents and the temperature was probably 10 degrees higher than the already 30 C it was outside. To say the least, hardly ideal learning conditions. After about 3 hours of walking around Salag talking to families and meeting with the barangay captain (like our mayor), we headed back to base.

That afternoon we took a vehicle (what a treat!) and headed into the most remote area of the 2 barangays. On top of seeing the massive damage done by Yolanda, we met 2 special families. We had heard about both and they were our main reason for this afternoon excursion.

The first family was basically a single mother with 9 children. Sorry not quite correct - one of her children after the typhoon had since died from starvation so there is only her and her 8 children with the youngest child being only a few months old. Right after the typhoon, her husband abandoned her and the family. Their house was destroyed; the 9 of them are living next to a relative in a very small dwelling that probably measures 5’ deep, 8’ wide, snd 4’ high – ALL 9 of them!! This space is barely big enough to kennel a dog.

The second family we visited was that of a motherless child. She has a father who is away quite a bit working so she is on her way a lot. Their house was completely destroyed and she is staying with her grandmother right now. A lot of children in this area only have a mother or a father, but the difference in this case is that the young girl, 13, is blind! Her grandmother brought her out to meet us and it was one of the most emotional things I have ever experienced. I am struggling to control my feelings again just writing this. Then, as we were leaving, the family members went out to what remains of their crops and brought us back a squash to take home. They also gave us some fresh peanuts (first time I had even seen a peanut bush) and wanted to give us some corn. These people have nothing, but the little they have, they were prepared to share with me. Truly humbling. 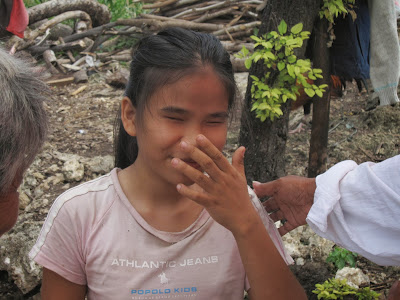 It had been 33 days since the typhoon crossed over the Philippines and  much of the area affected was still without power including ourselves. RAF had purchased a generator and lent it to Sally so we had some lights at least, but generally it was shut down around 8:30pm so early to bed as the norm. But Tuesday night, a big breakthrough for Camoboan – in the dark as the electricians were working by flashlight, they were able to provide power to where I was staying! The balance of Camoboan will get it the next day and Salag probably 2 days after that. While not much, it will provide some encouragement to the 2 barangays. And what do the workers at Sally's want to do first - in typical Filipino style - they want to sing karaoke! It was great to sit back, listen, and see them forget about their troubles - if only for a few hours.

Wednesday morning I was able to accomplish my last goal of seeing the chainsaw in action. I went with Jimmy, who knows at least 3 words of English, to an elderly lady’s place so he could remove the tree that still rest on the roof of her house, stopping her from repairing it. The crew of 4 with 2 chainsaws were very efficient in cutting and removing the limbs of the tree. Within 25 minutes the job was done. 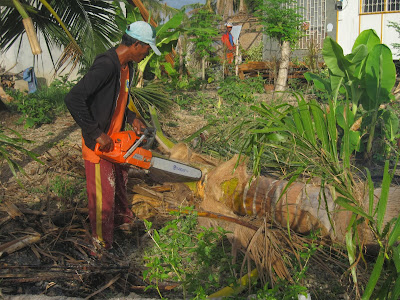 Anyone looking to make a personal donation, another chainsaw would be the ticket. They are quite expensive here though. The one we bought cost 35,000 Pesos or about $875 Canadian. A lot but given that they are very capable of cutting lumber, it would be a very good and needed investment.

I returned Wednesday afternoon with Mike Smith. I mention his name because him, along with us, are basically the only people helping these 2 barangays. Mike and his group has raised about 1,000,000 Pesos which has been spent there. Along with a generator among other things, Mike has been able to build 10 new small houses and will build 5 more. 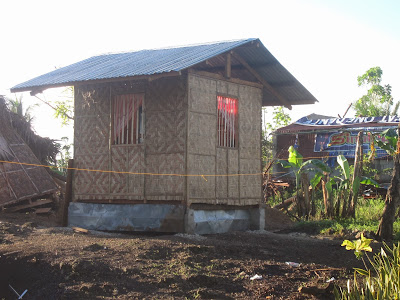 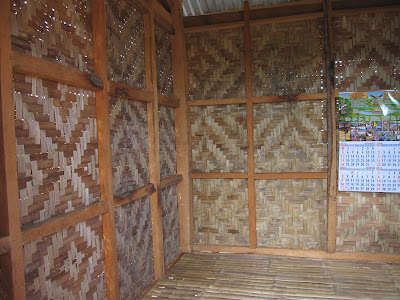 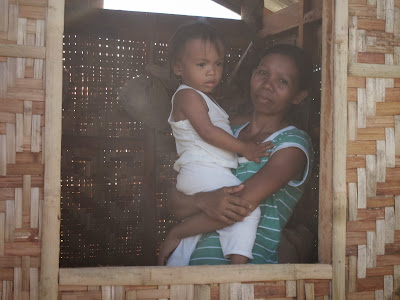 Well, that brings us to today. The plan going forward is that Gabe from RAF and I will head back up to Tabogon Monday morning to do some more assessments and to purchase the materials to build 15 more houses. Gabe will return Tuesday and I will remain for 4-5 more days actually helping build some of the homes. Hard to believe a retired banker can help, but actually, I am a pretty good handyman and can swing a mean hammer. 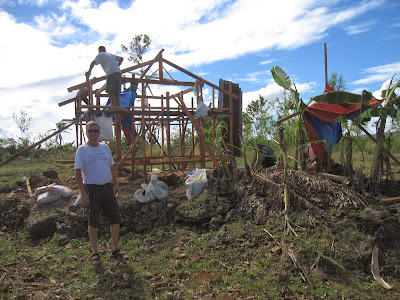 Christmas is fast approaching and I will try to provide one more update after I return before Christmas. If I can’t, my best wishes for a Merry Christmas and a Happy New Year!!!