After flying from Toronto, Ottawa, Kamloops and Victoria, the team came together in Manila at 4:30 am this morning. Debbie, Schaana, Dianne and I were happy to see Rick and Heather waiting for us when we blearily found our way to the gate for our Cebu flight. 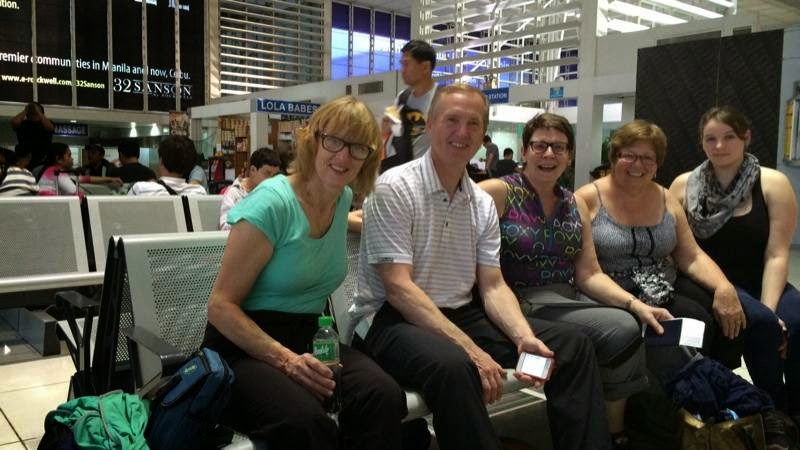 Those of us who needed it managed to find some coffee then we all chatted and watched the sky get brighter. After a bit of a delay, we were on the last leg to Cebu.

We arrived about 40 minutes late, and when we went to gather our luggage, we discovered that Rick and Heathers bags with all of their clothing had not arrived. They had all of their donations for Rise Above, but nothing for themselves to wear. We reported the bags missing and were told they would be on the next flight. It is 3pm now and here's hoping they arrive soon.

We were greeted at the airport by a smiling and Jenny and Suzy with cold water bottles and a tray of mangoes and bananas. Rick, Heather, Schaana, Dianne and Debbie crowded onto the two bench seats in the back while I sat up front with our hosts. I felt right at home when I hoped in the front and was greeted with the Phantom of the Opera soundtrack on the radio.

The drive from the airport was our first chance to really see Cebu and the country. The streets were so busy and traffic seemed to run with no real rules rhyme or reason much of the time. The colourful "jeepneys" (these are old army jeeps that have been converted into city buses) were all packed with people hanging off the back street car style. There are also lots of motor bikes and scooters. Debbie and Schanna noticed one mother riding on the back holding her baby while the driver wove through traffic.

We arrived at the hotel, freshened up and headed to the roof top terrace for lunch. Schanna was a bit tired so headed for a nap instead. The restaurant is lovely, it is open with views of the city and a great breeze to help with the heat. 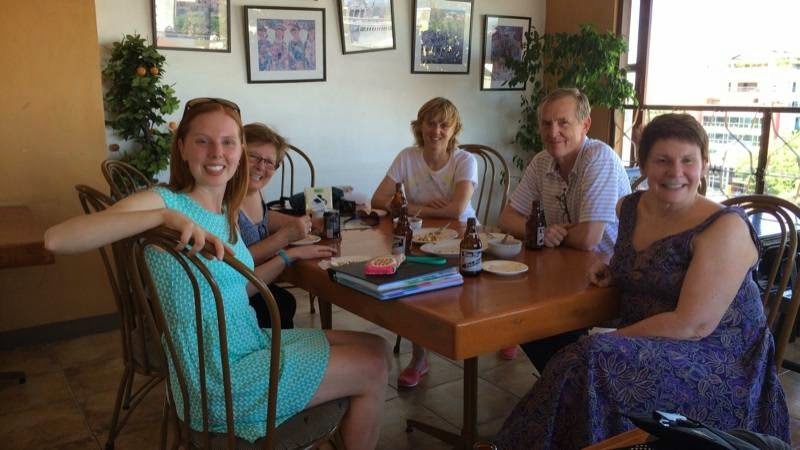 After lunch and a rest Debbie, Rick and I headed out to buy water for the team and a SIM card for our cell phone. Luckily Jessica from DWC was here two weeks ago and had let us know where the grocery store was. Even walking those few blocks in the heat was intense. We wandered through a mall area and Rick was very excited to see that there was a spot that offered a 30 minute foot massage for 200 pesos ($5); if we are missing Rick after a hard days work, I guess we know where to find him. We also walked past a couple selling the cutest tinny puppies that still had their eyes closed. I thought they looked like they would love Penny and Spencer (my dogs), but I guess volunteering with a puppy would be hard.

We are now back at the hotel resting up before heading out for some BBQ dinner. Tomorrow is our first day of volunteering so I will post after that.