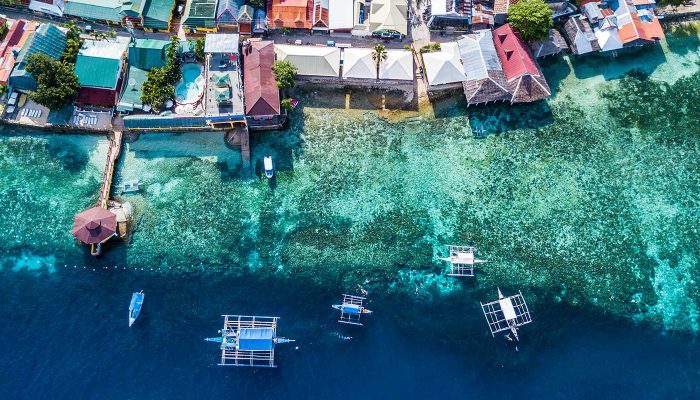 Oh what a beautiful morning! Sunshine, blue sea and hearty breakfast gets us in the spirit to load up and head down the dusty road for the next stage of our project. Today, we are rolling on the colour – sort of a forest tree to blend in with the landscape a bit. But just a bit.

When we arrive at the first location, we unload the painting materials and a cooler full of cold water and split into two groups. Debbie, Robin and Schaana head for a home the size of a small shed which belongs to an old man.

No matter what kind of racket the girls make, the old man appears to sleep through. When they need to move inside the house to do some painting, the old man doesn’t appear to hear their calls.

Time to bring Gab into the mix. The girls soon discover that the old man is deaf and didn’t realize the painting was underway! Before long, he was chattering non-stop to the girls. Unfortunately they didn’t understand a word he was saying. But they knew he was some happy to see the paint being rolled on to his home. Even the man’s hen seemed to be taken up with all the action!

It was jumping in and out of its basket and flipping around the inside of the shed to check out the girl’s work. Heather, Rick, Dianne and Gab worked on the bigger house. The kids from nearby homes were fascinated with the job. Gab soon got the boys some brushes and they joined the work team.

The little girls shyly passed on our offer to have them help out. So Dianne and Robin gave them a camera to try and take pictures while one of them got their hair put into a French braid. She looked adorable!

Back to the beautiful Sea Turtle Lagoon resort — a bit of paradise by the sea. We headed straight for the sea and a big swim. It was high tide, so Debbie dove in off the ledge, others jumped and Rick did a cannon ball. But the best was Gab who did flips and all sorts of marvellous jumps from on high. We still think he looks like a boy when he gets his hair wet!

After lunch, we went for an adventure along the coast in a small boat. In my head, I was singing “Under the Sea”. We were on the look-out for turtles. Alas, there were none to be seen. But we were thrilled to see some small silver fish fly out of the water and skip across the surface like pebbles! Too much fun! Later, we put on some snorkels and snaked around the water searching for brilliant blue starfish, and amazing fish of all colours. It was amazing to see.

We came back too late to do gardening at the local school. But Rick and Gab managed to finish clearing the back courtyard of rock and rubble and checked out the state of the latrine.

Later at night, we dined outside gazing at a beautiful full moon that shed a band of golden light on the gently rolling waves. We are all so grateful to be part of this adventure.