The started with plans to leave at 0600 with our driver, Dee, and a guide that was to be provided by the hotel.  We would spend the day visiting Bokor Mountain for hiking and then go into Kampot and also visit some local caves.  All six of us were ready to go, but the driver couldn't find the guide, so Vy got involved with her mobile phone.  We were told that he was "on his way," but by 0630 no one had shown up, so we decided to just take off on our own with Dee.

I rode shotgun in the van and enjoyed taking photos out of the windows with my 70-200mm image stabilized lens.  The morning light and traffic gave me some pretty good shots given the circumstances.  You can check those out directly in this Facebook Album. 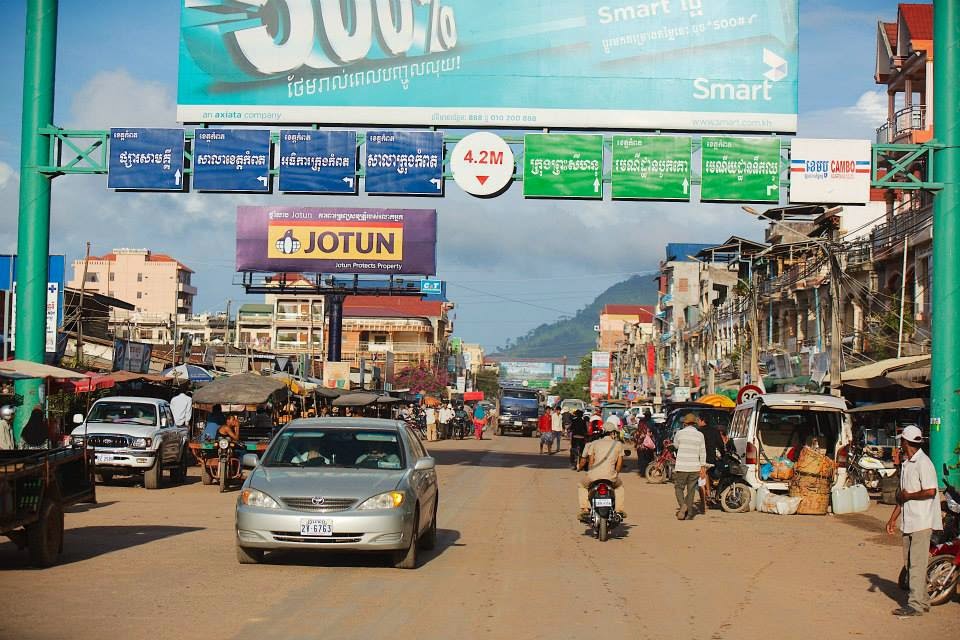 We arrived in Kampot at about 0715 and Dee drove us around a little bit to see the Durian Monument, the external views of the Central Market and also to see the new and old bridges.  We headed out from there a few minutes later, crossing the New Bridge on National Road 3 (two lanes, no centerline) towards Sihanoukville and Bokor.  The phone rang a few minutes later and it was Vy asking us to go back to Kampot because she had found a guide that could meet us at the Durian monument at 0800.  So, we turned around and were there by 0730.  Dee let us out of the van and we walked around a little bit.

One of the cadets needed to find a bathroom, but he soon discovered that not all gas stations in Cambodia are really "rest stops."  So, we were on the search for a WC.  He tried a couple of guest houses, but they wouldn't let him in.  A few blocks down the road, we came up on the Kampot Pie and Ice Cream shop that we'd seen in an advertisement on our regional maps and found it open.  We ordered drinks (espresso for me, iced Vietnamese coffee for Annie and Dylan, and some fruit juices I think for the others while first Winston then others cycled through their bathroom.  The servers were very pleasant and asked us to come back later in the day for ice cream--which we did because they gave us two-for-one coupons for ice cream.  The espresso shot was only $1 and the same was true for the ice cream.

Back at the Durian Monument, we took more photos, but the guide never showed.  We waited until after 0830,but just left. We'd now wasted almost two hours of the morning.
The drive up to the top of Bokor Mountain was not unlike driving up to Olympic National Park in Washington--a long, winding road taking us from the shore to over 3,000 ft in altitude over about 20 miles (32 km).  Along the way, we saw a giant Buddhist statue that was partially covered in fog.  I was just happy that no one got car sick and we didn't have any head-on collisions with on-coming Vietnamese tour buses cutting the turns. 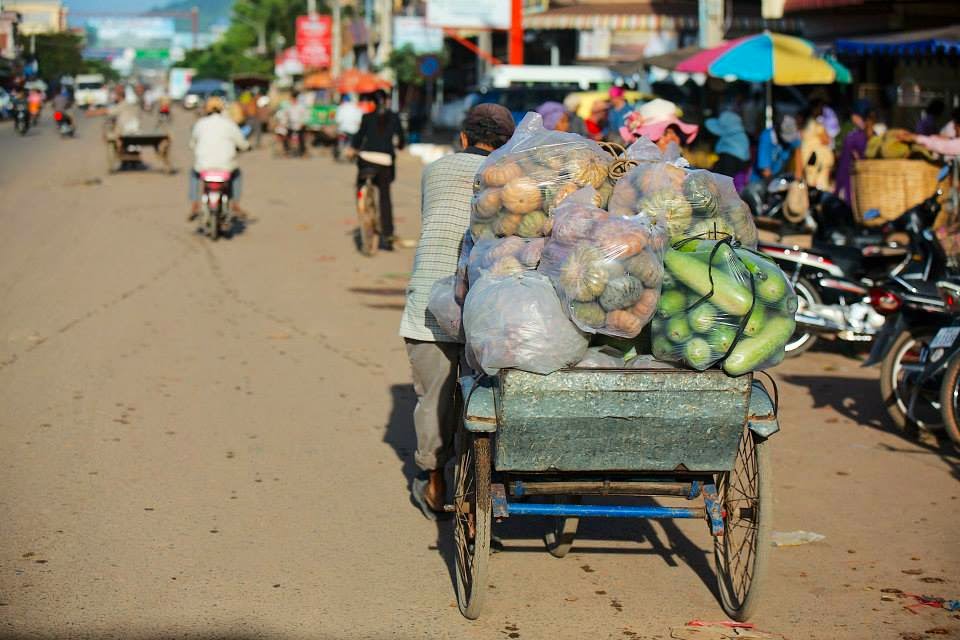 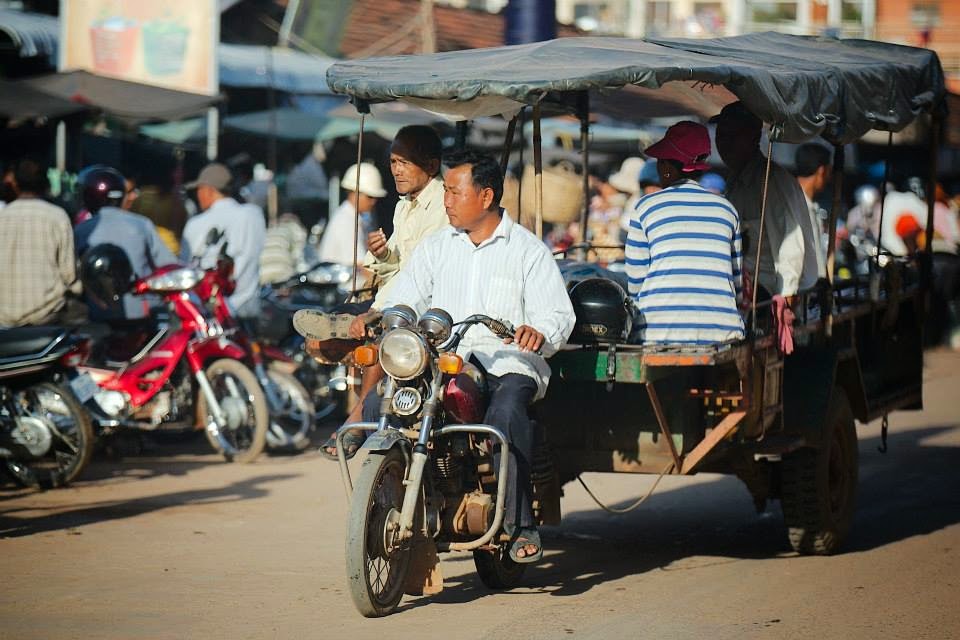 By the time we arrived at the summit, it was foggy, misting heavily and refreshingly cool.  We went past the new. modern casino to the "Old Casino" built during French Colonial times (1921) and long since abandoned and stripped of everything except maybe a few tiles.  The starkness of the stucco and architecture, along with water settled on many of the floors (even upstairs) made for some fun photography and the cadets enjoyed roaming around the haunted house.  We followed all good horror story laws, though, and didn't let anyone go off alone or run towards any screams.  We were also lucky that we got a clearing in the clouds for about two minutes, allowing us to take a few good exterior shots.

Apparently, Dee didn't want to take us to the other "ghost town"-like spots.  Communication was difficult as Dee knows only about 5 words in English.  I was texting questions and tour suggestions to Vy who was then texting or calling Dee to pass along that info.  Much was lost in translation.

From the Old Casino, we went to a beautiful Buddhist temple complex and monastery on a hill well above the modern casino.  Shrouded almost completely in mist while we were there, it reminded you of being much higher in the mountains as clouds raced up the cliffside from the valley below.  During the few clear moments, though, we could see all of the way to the beach and the Gulf of Thailand.  The cadet and I explored the entire area and even made it into the monk's area for their lunch to get a few photos.

From the temple, we went to the (supposedly) four-star New Casino to look around.  This was a large, Las Vegas Resort-sized complex with hundred of rooms in several buildings, bars, gaming areas, etc.  It was also almost completely empty.  We walked around in it almost like it was the Old Casino--only with uglier interior decorating and architecture.  It just reeked of the style of cheap, garish decor, lines, and design that I've seen so many time before in bad Chinese construction.  I took zero photos of it because it was just so ugly--and not even in the good, quirky way that makes for some good photos.  Ugh.  We were happy to leave.

From there, we'd hoped to be able to go see some local waterfalls, but all of my suggestions and map-pointing apparently did not impress Dee, so we headed down the mountain for lunch in Kampot, stopping along the way to get a panoramic photo.

We lunched in Kampot at the Rusty Keyhole on Vy's recommendation. She said that they had the best ribs in Cambodia. The placed looked good and had small pitchers of beer for $2.50 and reasonable prices, so we stopped in. The drinks were quite good,too, though the ribs were nothing special. Luke had a cheeseburger with egg on top and fries. Annie had pasta, Hansena and Dyland shared ribs, and Winston got some stir-fried squid dish. I ordered the daily special grilled barracuda. In what has become a common theme of restaurants in this area, everyone's food was served, but it took well over 30 minutes for my "special" to arrive. When it did, it was quite good, but knowing that it doesn't take long to grill a barracuda filet, they may well have gone across the street to the fish market to get my lunch.

After lunch, we decided to split into two groups and then meet back at the ice cream shop at 1500 and then at the Durian Monument to meet Dee at 1515.  Winston and Dylan came with me and we made our way to the Central Market, pricing scooters along the way and taking photos.  The market was pretty amazing and ALL locals.  We didn't see any souvenir or T-shirt shops here.  We did buy some durian fruit here and Winston was the brave man who tried it first, much to the viewing pleasure of the locals.  Kampot is the center of both the agricultural durian market and also for the production of peppercorns.  We saw lots of peppers (black, white, green, and red) and even some jars of pickled green peppercorns that we almost bought.

We all rendez-voused on time at the ice cream shop and passed around the tray of durian for the others to enjoy.  I'm no fan--primarily because of the muddy texture that is somewhere between a rotting avocado and pudding, all with a smell that would clear out a public bus (you can't eat them in public transpo in Singapore), and a bit of a sickly sweet taste.  Winston had another piece and I ate three chunks to help encourage the others.  Dylan, who'll eat almost anything that crawls or flies or can be found under a rock almost gagged on his and the other three cadets tried their best to choke down one segment, but couldn't quite finish their small bites.  Still, we'd all done our duty and tried the treasure of Kampot.

On our return, we turned left off of the National road towards Phnom Chhnork, a cave complex in the nearby hills that houses a Pre-Angkorian Hindu Cave Temple and an interesting rock formation at the entrance that looks like an elephant.  The admission cost was $1 apiece and we climbed the 203 stairs to the entrance accompanied by three ad hoc tour guides all about 13 or 14 years old.  They spoke excellent English and some French and asked the cadets with help on some idioms--though they knew quite a few.  (For example, when one of them asked me to climb/slide down into a steep, dark part of the cave and I said, "No way", he chimed in immediately with "Way!" I then taught him the phrase "November Foxtrot Whiskey," thus contributing to his cultural knowledge of the American military.

We took some photos near the entrance of the small temple and all went with the guides into the depths of the cavern except for Annie and me.  I used the time to take a panoramic shot of the view from the cave entrance.  They all emerged about 10 minutes later from another entrance down the mountain much to our relief. 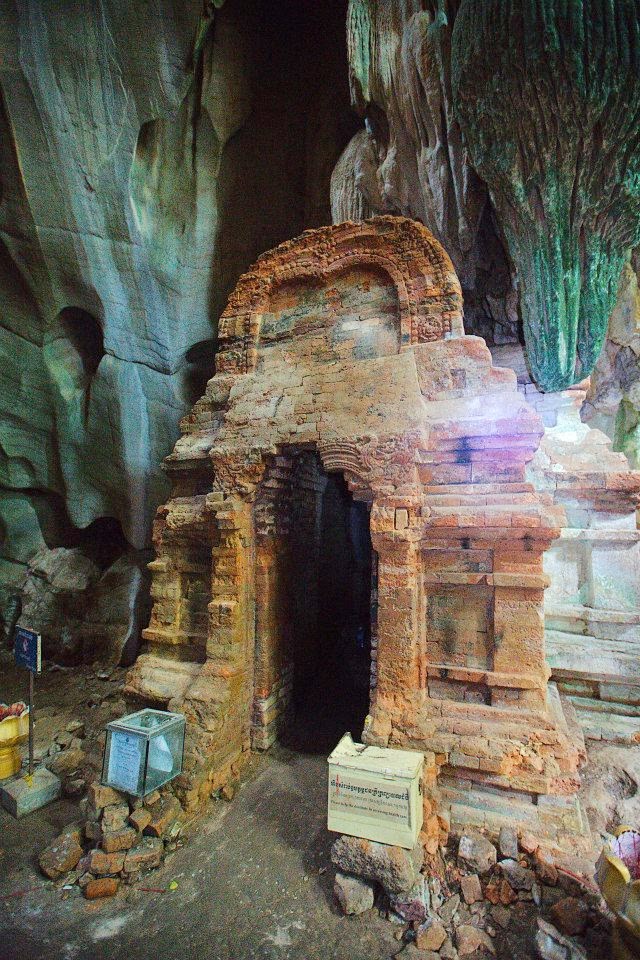 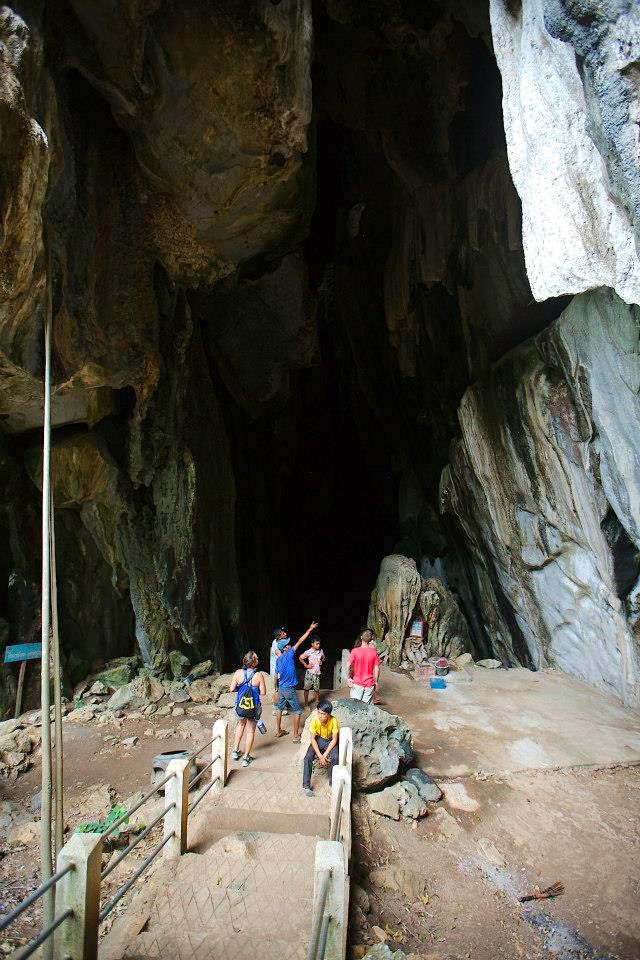 From there, we walked back through the fertile and busy farmland about a half-mile to where Dee had parked the van. We crossed a two-log bridge over a canal and chatted more with the kids.  They said that they'd only been studying English for two years bu that their school was very good.

It rained lightly for most of the return to Kep.  After a shaky start, we'd had a good day and all of the cadets were happy to return at a reasonable hour.  We later met for dinner with Dan, his Cambodian friend, Savon, and Vy, discussing our plans for the next day (boat to Rabbit Island (Koh Tonsay) and Koh Por) and turning in early.  Here's the link to the entire slide-show from yesterday.