Today, the cadets were allowed to sleep in and we didn't depart until 0900--my wife, Becky, can tell you how rare that is when traveling with me.  They all made it down to the van in time, though, but didn't order breakfast from the hotel.  I think they all made breakfast out of leftover snacks from yesterday's trip and Friday's party.

We'd arranged, with the help of Vy and the hotel, to rent a boat for the day including the the boat owner/driver and planned to visit two or more of the islands off of the coast of Kep.  We drove to the boat dock and were directed to the end of the pier where we met our typically long, skinny Mekong River-style boat that you see all over Southeast Asia. The engines are side-mounted diesel of gasoline motors that look like they've been stripped from a car or truck.  The propeller is attached axially at the end of a long shaft that extends from the engine by 8-10 feet and turns a two-blade propeller at a shallow angle.  Like the boats on Tonle Sap, the props have a lower protective framework to keep them out of the mud.

We loaded up without issue, put on our life jackets and left for the one-hour ride to Koh Pau and the fishing village there.  The seas were moderate and we rocked a bit, but no one got sick (even me) and we pulled into the little bay at about 1010.  Savorn, a Cambodian friend of Dan's, was with us.  He translated and told us all to be back at the boat by 1100. (Photos are here) 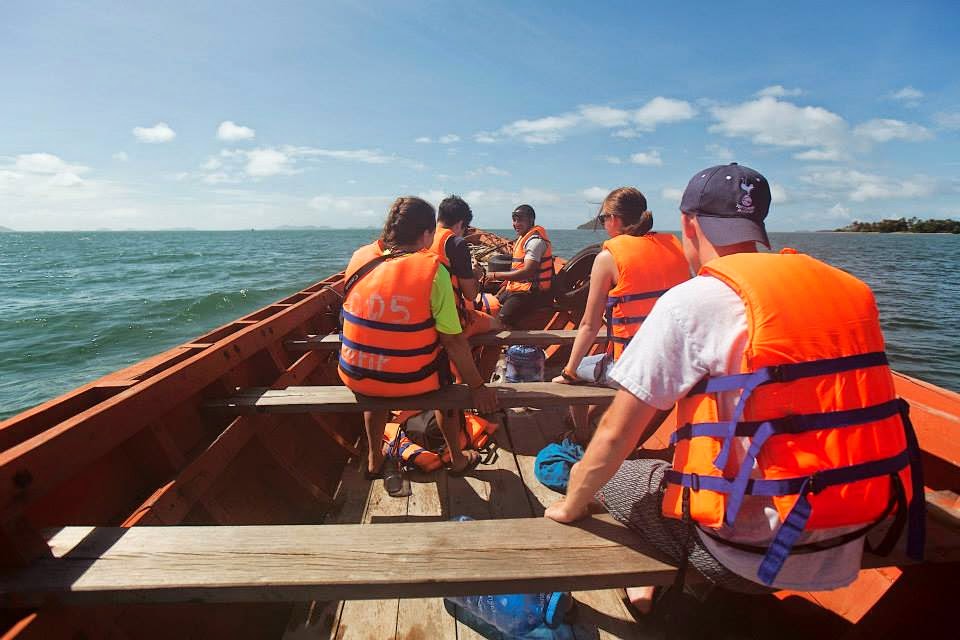 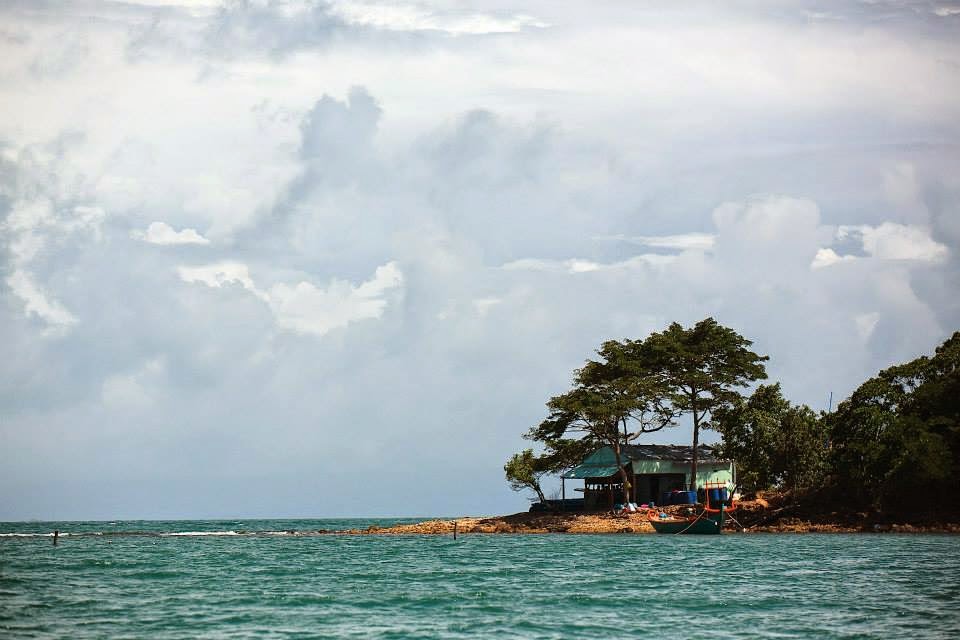 We waded ashore past an abandoned boat and along the garbage-lined shoreline past several ramshackle houses with palm frond roofs.  Dogs barked at us and kids scurried along as we passed, some of us looking for shells while I took photos of the boats in the bay and of the local residents.

We rounded the corner of the island and passed along an uninhabited section that was quite rocky.  After clearing this, we had a shortcut through the jungle and past some houses to the main area.  We saw a LOT of kids and I took photos.  They started following us and I took more photos.  They were all very friendly and obviously surprised to see us.  The cadets and I had a great time interacting with them.  They were just beautiful kids stuck in a very, very poor situation.  It was difficult not to feel pretty about their lot as we waved goodbye and left for Rabbit Island.  Here's an album of photos of the kids, plus another one showing other parts of the island. 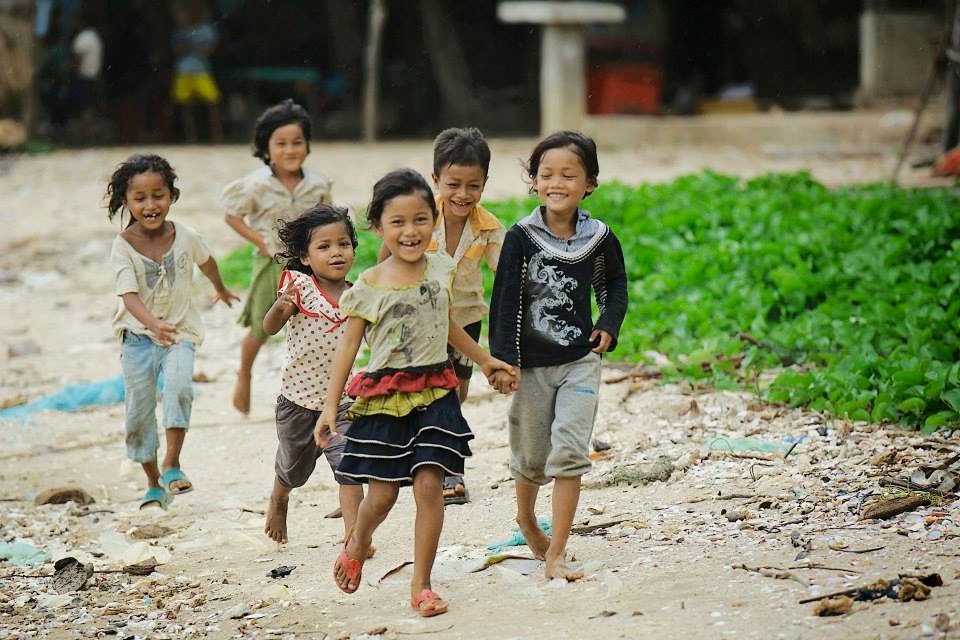 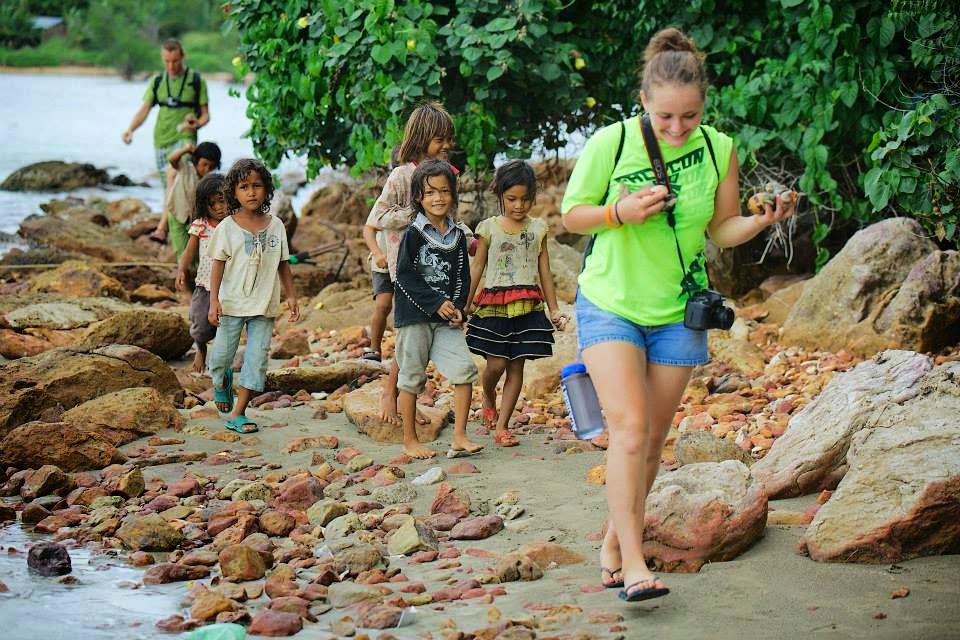 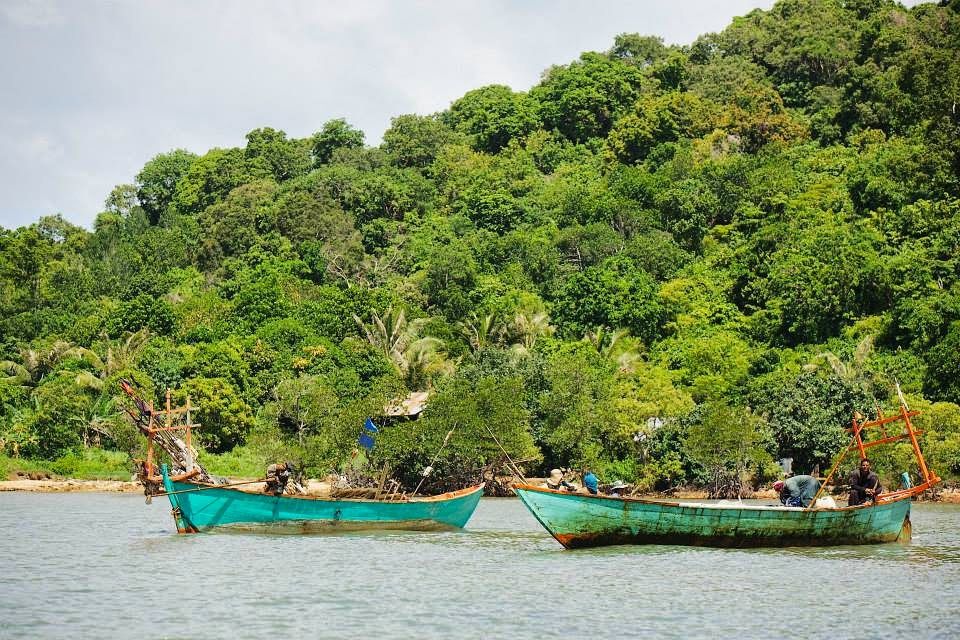 Soon after the boat left Koh Pau, the wind picked up and the rain started.  Almost then entire 25 minute trip to Koh Tonsay (Rabbit Island) was in rolling four-foot waves and a driving rain storm.  We covered what we could, but we all got soaked to the bone.  The rains stopped just a couple of minutes before we landed at the shore, though, and stayed nice throughout the rest of the day.

We left the boat and walked along a path to the south shore of the island that had dozens of thatch bungalows, a few outdoor restaurants, a nice beach, and plenty of hammocks.  We ordered lunch and found the service to be, once again, lacking.  Dylan finally got his food almost 90 minutes after he ordered it.  They said they'd run out of beef and needed to run to one of the other restaurants to get some.  We worried about the local canine population.

Finally, just before 1400, we were done with lunch.  I set a rendezvous time for 1600 at the boat and then allowed the cadets to do whatever they wanted along the beach.  Dylan joined me on a hike around the island on a path that was easy to follow but contained enough thorns to lacerate each of us pretty well, take my hat off of my head, and make for a lot of crouched walking.  Along the way we saw locals cultivating sea weed as well as several small fishing settlements and boats.  The hike was supposed to take us two to two-and-a-half hours, but we made it back in 75 minutes and were happy to have the time to order a beer and enjoy it on the beach before we left.  Annie and Hansena were catching some rays on the beach, while I think Luke and Winston napped in the hammocks.  We were all entertained by and Australian couple (we think they were Aussies) that were in their mid-50s, tattooed, over-weight, bikini'ed, and getting the sunburns of their lives while constantly drinking and smoking, standing in the waves.  It made me think of the US Gulf Coast...  I took no photos, fearing for my camera's well-being.

The trip back was again through fairly rough seas, but there was no rain (photos).  Dylan sat on the bow, which was probably drier than the mid-boat areas as the waves crashed over the sides.  We returned to the pier at about 1615 and were happily back at the hotel by 1630.  We set a meeting time for 1830 for dinner and everyone went to their rooms to dry out, clean up, and relax again--I worked on photos.

We went to dinner at 1830 to Holy Crab along the Crab Market area and (for once in Kep) were very impressed with the service--the food was excellent, too, and the prices quite nice.  There's a reason that it's the #1 ranked restaurant in Kep by Tripadvisor.  We talked a lot about photography at our end of the table.  The food exceeded expectations, too.
Tomorrow, we start a new pair of latrines in the same village but along a different road.  We're all looking forward to doing the project again with the knowledge that we've gained from the first week and are sure that things will go much more smoothly.  I'm planning to go to the local market and buy a couple of good, new shovels for the team and then donate them to Equitable Cambodia.  Winston's looking forward to more digging and I'm happy to make sure he's well-armed.

We should finish this pair on Thursday, then the plan is to meet at a local school on Friday and do a little more local touring before we board the minivan with our bags and drive to Phnom Penh.  Our flight leaves that evening, so it'll be a busy day.
Here's the slideshow from today: