There was quite the thunderstorm here last night at about 0400 with torrential rain and lightning, but when we woke up the rain had stopped long before breakfast and it was breezy and noticeably cooler.

I woke up early and got some work done writing and working on photos and got a Facebook message from Annie that she wasn't feeling well.  I went next door to check on her and she was nauseous and had spent most of the night dizzy and in cold sweats.  She didn't have a noticeable fever, so I ruled out malaria and chalked it up to probably not taking yesterday's two plus hours on a rocking boat at sea too well.  She admitted that she hadn't probably had enough water, too, so I encouraged her to drink a full bottle and start working on another.  After a conference with Dan and Vy, we decided to leave Dan's cell phone with her and let her stay in the room and rest for the day.

We left the hotel on schedule and dropped by the local post office.  Hansena mailed a bunch of postcards and was a bit worried because she said that she had to lick all of the stamps.  Maybe not a good idea in Cambodia.  Oh well--we'll see if that gets her.

We next stopped at a "hardware store" and I bought two shovels for a total of $7.  These were medium-sized spades with handle grips that I thought would help us at the site since we didn't have very good shovels last week.

The drive to the new worksite was a little longer and we turned north off of the main road instead of south. Once onto the dirt road, we went about a half-mile into the countryside where we found the homes to be more spread out with rice paddies/fields separating all of them.  It was really beautiful and we liked the area immediately.

We got out of the car and walked across a palm tree log bridge that spanned a small pond and then shortly arrived at the first work site (photos here).  We dropped Team 2 there and they rejoined their team leader from last week who was already started digging the square trench for the foundation.  Team 1 walked about another 100m across a couple of rice fields to the second site that was next to a rather larger house with accompanying palm frond roof barn for the animals. The land around the house was much more spacious and open and we were shaded by coconut palms. 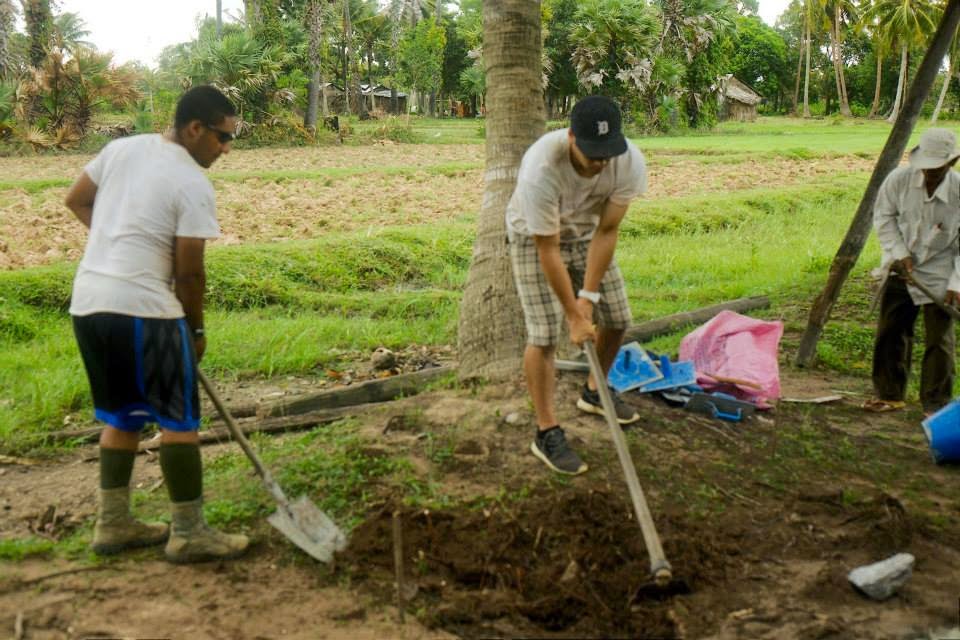 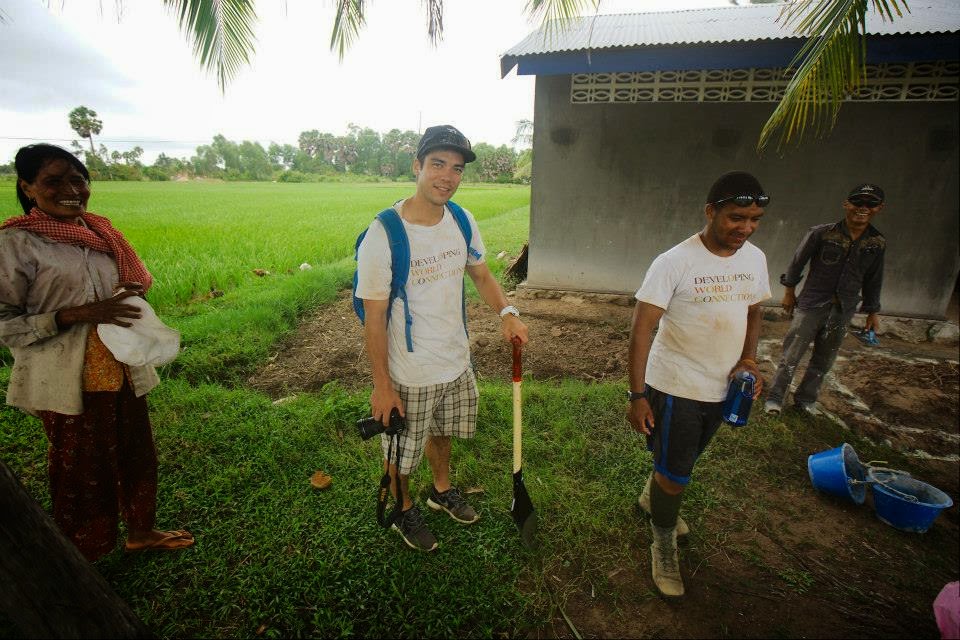 Jay was there and he and Mr Song had already dug the foundation and were pouring concrete over the granite boulders that they'd placed with sand in the foundation trenches.  We immediately started placing the first layer of bricks onto the foundation concrete following the guide lines and also started digging the septic pit.

Once again, we struck water before we made it much deeper than a meter, but that was proceeded by a lot of work cutting through palm roots to get to the base clay.  Winston was schooled by one of the ladies of the house (age 49) on the proper use of a hoe to dig a hole.  She was amazingly strong and effective and we were all humbled.  She MAY have weighed 110 lbs, but I doubt it.  Winston had another digging helper, too, whom we presumed was the man of the house, but that's still TBD since they speak no English and we speak very few Khmer words.  Once they got through the roots, the work went very fast, though, and by lunch time it was clear that we would have the concrete cylinders in place later in the day.

As we laid the bricks, mixed the concrete, and really got into a groove, we noticed that almost everyone around us was supporting the effort.  Little kids were delivering bricks and shoveling mortar into our buckets. The sisters that live in the house were helping dig holes, delivering fresh coconuts for refreshment, and doing as much as possible.  At our last site, I have to admit, it was frustrating to see the number of idle people doing nothing--at least at our latrine site, though Team 2 had a little more support on their side of the road.  Today, it was our team with the support and our work showed for it.

There was a lot going on at the farm, too.  Seven-day-old puppies were yipping in the wood and palm leaf cooking shed next to us and a couple of them tried to crawl out from underneath.  Chickens were constantly running around us and the kids were everywhere.  Still, despite the distractions, we were moving at a great pace and had more than seven rows of bricks laid with the door mounted and sand and rocks inside the latrine before lunch. (Photos here) 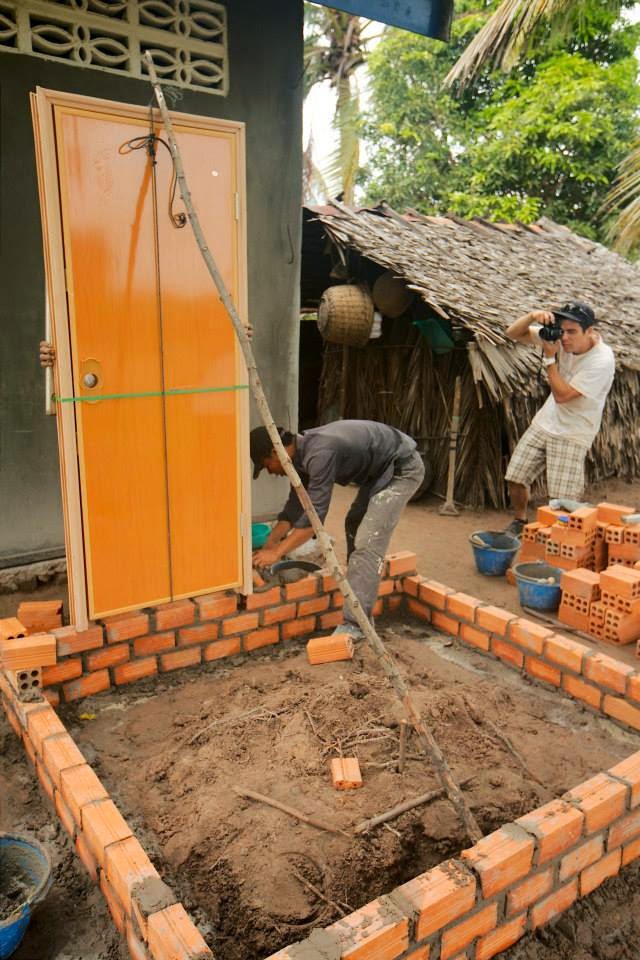 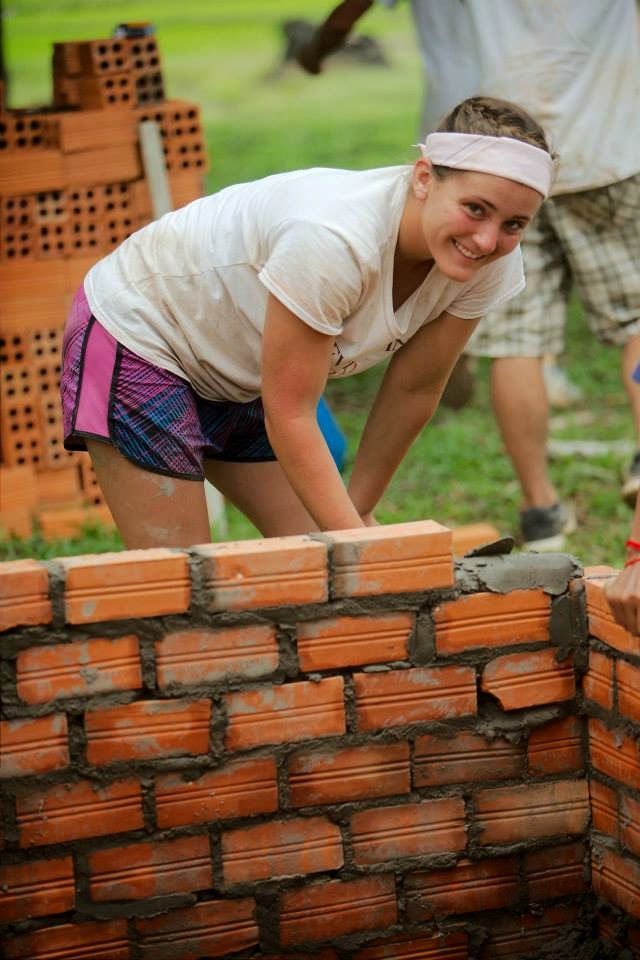 We drove to The Vines again for lunch and had their amazing Cambodian salad with peanuts again, along with a squash and chicken soup.  We decided to cut lunch short and get back to work earlier than usual since the weather was so good and we were being so productive.  We called Annie to check on her and she reported feeling quite a bit better, but we decided to let her rest through the afternoon and prep for work tomorrow if she continued to improve.
We were back from lunch before 1330 and spent the afternoon placing the cylinders and working hard on the bricks.  The ladies brought us rambutan fruit (like red, really spiny lichee nuts) and bananas (later) as well as sweet, iced Vietnamese-style coffee.  The weather continued to be nice, so we mixed batch after batch of concrete on the hard ground near the front of the house and the kids kept us going.  We had four bricklayers for most of the afternoon, except for mixing breaks and when we put the cylinders in.  By the time the afternoon was complete--and we worked until 1700--we had at least 18 rows of brick laid (over 6' high), the cylinders placed, and Jay was installing the concrete vent pieces.  (Photos here) 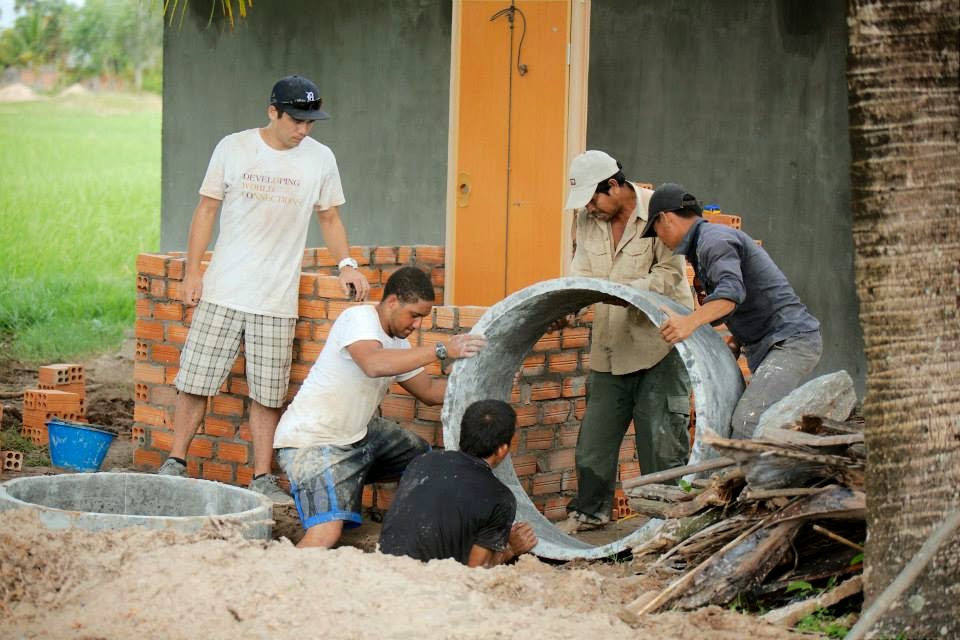 Vy came over and helped me chat with the family while I was laying the last couple of rows of bricks.  They explained that three sisters (ages from the late 40s to early 50s) lived there and in neighboring houses with all of their kids, Grandma lived next door butslept i nthe big house at night to protect her from "ghosts," and that the small baby was five months old.  I explained the composition of our group and our purpose and made it clear that we were in the US Air Force.  They were very happy to have us and kept thanking me over and over again.  I tried to convey how much we enjoyed the work and appreciated their support as we worked and their participation in the process.

We left at about 1700 knowing that both groups had had a great day.  We were happy to be more in the country and around the rice fields and really like the families that we were helping.  Of course, I spent most of my break times taking photos of people and our work, so you can see those photos here. 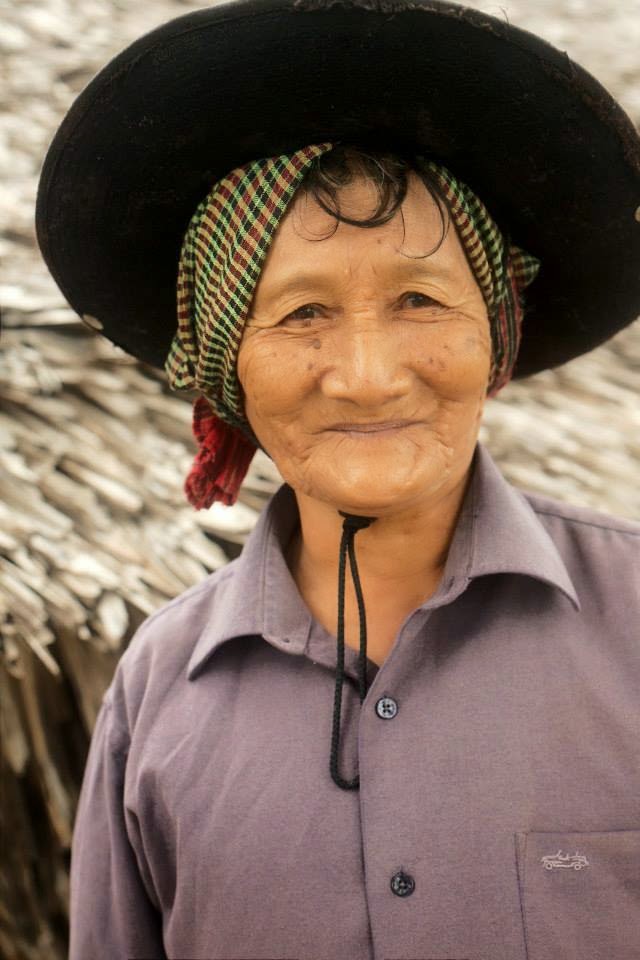 When we returned to the hotel, Luke suggested an early dinner, meeting at 1800 to walk over to a French Bistro named "Brise de Kep."  Everyone showered and cleaned up quickly and Annie joined us, too, feeling much better and ready to work tomorrow.  We walked over and generally enjoyed the meal.  I ordered a tuna steak for $4 and it was overcooked, but Dylan had Magret de Canard and it was good, while Hansena had a good barracuda filet and Annie ate their version of a fried chicken breast.  To pass the time, we played cards (the France Family's official card game that we call SOYN).  It was a good time and it kept us busy and not complaining about the service all of the way through dessert--which was the best part of the meal.

We're looking forward to tomorrow and will finish the bricklaying in the morning and hopefully get most of all of the stucco done tomorrow afternoon.  We're feeling good about finishing on Thursday now.
Here's the slide show of all of the photos taken today: