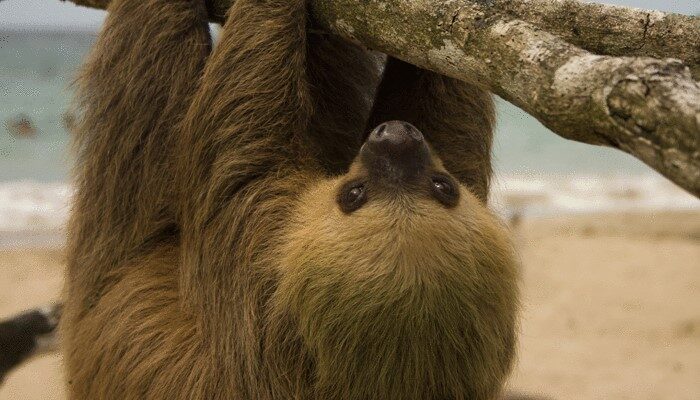 Following a long and tiring journey, everyone was eager to explore the sunny country of Costa Rica. The day began with mango picking in the beautiful Jardin de Mango, located at our lodging vicinity.

Following a relaxing morning of mango picking, we proceeded to go paddle boarding at Namdamojo River.

Although some of us had previous experiences paddle boarding, it was a brand new activity for others. Everyone was immersed in nature and surrounded by breathtaking scenery. Paddle boarding was an entertaining experience, characterized by a beautiful sight.

In addition, we continued our day by visiting Playa Junquillal. The soothing sound of the ocean waves and the salty air provided for prime relaxation. Playa Junquillal was an amazing sight.

Finally, we ended with a short orientation concerning the work we would commence the following day. We learned about the water crisis within the region and the manner in which we would contribute to improving it. The students learned about the Nandamojo Watershed. We became aware of the problems associated with agriculture and its effects on Costa Rican communities’ access to potable water. Namely, clearing the land for agriculture and a lack of vegetation caused the grounds in said region to no longer absorb rain water. The property soil posses, where it is capable of absorbing water, is essential within the process of water being drained to watersheds underground. However, when soil no longer exhibits this property, there is a loss of water, which do not reach the watersheds. Thus, many communities who are dependent on the water begin to struggle. They experience hardships due to a lack of easily accessible potable water.

Our group will aid this problem through completing various tasks within the works site. We hope to restore vegetation within the region to help restore the watershed.

Furthermore, we were able to familiarise ourselves with our new working area for the next four days.

The group started their day with welcoming remarks from Matt, a volunteer coordinator, followed by Marcia, a loyal and passionate employee. Each helped explain the different jobs that will be divided among the students. Some of the jobs included building a propagation center, pruning the saplings and transporting to different places, and creating an environment for the saplings to grow.

The building of the propagation center involves drilling holes through pieces of pre-cut woods and nailing them together. By the end of the groups first day of service the base of the probation center is complete. When the center is done it will be used to prep the new sapling growth.

The pruning of sapling’s includes cutting the roots of little saplings and transporting them to pre-made beds where they have more room to grow. During the rainy season which is from around April to November the saplings are then moved to be planted next to the river in order for them to grow into nice beautiful trees. The new grown trees will then be able to now help with the water cycle. As more vegetation results in more drinking water.

Creating an environment to encourage the new saplings to grow involved insulating wooden boxes with cardboard. After the boxes were insulated they were filled with soil and the seeds were planted in the soil and watered regularly.

Today’s work consisted of planting saplings, adding a roof to the new propagation centre, and cleaning the pathways to the flowerbeds. Six local students joined us today.

Some people cleared out tree branches and dry fallen leaves that covered the pathways that led to rows and rows of young saplings waiting to be planted once the rainy season arrives. Some volunteers prepared the plant bags holding these saplings, while others continued to build the new propagation centre so that the planting can be done in a better facility than the old one with a mesh roof that couldn’t keep the workers dry.

This work is crucial to the ecosystem because the deforestation over the last century has caused a significant decrease in the total amount of rainfall per year. In the dry season, it wasn’t possible for us to experience the satisfaction of actually planting the saplings in the ground and enriching the forest. However, it’s the work that we did today and the work that many other groups will do in the future, which will eventually lead to the reforestation of Costa Rica.

We may not have been able to see a difference in the environment today, but the collective work of many willing volunteers (and hopefully the locals who will be made aware of the problems of their environment) will help Costa Rica return to its original state. We finished our service today at lunch because Marcia wanted us to come to a celebration for the volunteers at the fire department. They were receiving proper uniforms and equipment after a whole year of service.

Later we went to a Latin dance class and meditation session. The opportunity to learn about the culture and relax on a service trip was very much appreciated by most of us. Spending our time helping the ecosystem and communicating with locals gave us a much more realistic experience of life in Costa Rica than what we would have seen by staying at a five star resort.

On day five we arrived at a convenient store that had a recycling drop off right next to it. The area was filled from ground to the roof of the structure with an astounding amount of rubbish.

The structure had been clearly labeled but it seemed that people did not really care enough to follow the signage. This led to the garbage being disordered and mixed up, causing a huge mess with garbage flowing out of the structure into the parking lot. We spent the day sorting out the material into different colour plastics, glass, cardboard, and metal. The most unbelievable part of the experience was the amount of garbage that was mixed in with the recyclable material.

This task seemed to have an impact on the community, because as we worked a few people stopped to help a bit and several commented on the progress that was being made. This exercise was extremely difficult since the heat was sweltering at a balmy thirty seven degrees celsius. This being said, the students had a very tough time when picking up the garbage since there was not much shade for them to stay in except for their bus.

We worked extremely hard through the three and a half hours trying their very best to organize and clean the structure. This exercise had a great impact on us since it made us realize how careful and attentive we have to be when recycling. The structure had everyone shook due to the fact that it was unbelievable that people actually treat their community like this.

We arrived the R.O.W. at 8:30 to begin our last day of service. Six girls were chosen to go to the kindergarten with Alberto. Their task was to construct flower beds so the students could plant flowers in them. They had to saw and sand the wood as well as install the pieces into the walls to hold the soil which the flowers would be planted in.

The girls that did not go to the kindergarten stayed at R.O.W. and helped finish up all the projects. Some girls finished painting the signs and others painted the building which we built in the previous days. Many girls dipped their hands in paint put their handprint on the post of the building with their initials next to it to leave our mark behind.

Other girls made more fertile soil by mixing wood chips, dirt, and water. Once the painting and soil was finished everyone took up one last task together which was cleaning up one of the gardens and adding soil to any of the plants that needed it or even transferring them to a new bag if the one they were in was broken.

At 12:00 the girls returned from the Kindergarten and everyone ate lunch together. After lunch Marcia had a presentation on erosion and we reflected on everything we had done the past days. Everyone believed that they had changed for the better and were now more aware of what is happening to our earth and the water we have.

We then got changed and drove to Tamarindo where we had free time to explore the town and go to the beach. Some girls took surfing lessons, others rode horses along the beach, and some just swam and walked around. Everyone met up after sunset and we ate our dinner on the bus on our way back to the hotel.

We woke up in the morning and ate breakfast. After that, we went to our rooms to pack our bags to go on our zip-lining and canopy tour. When we arrived we were required to sign wavers for the company. We saw the horses in their stables. Some girls almost hit the horse but he moved at the last second!

During this, we got into our harnesses, watched a safety presentation and drove up to the mountain. Multiple guides came along with us to assist us before and after the zip lines.

Many girls were scared to go on the zip lines but in the end we were all happy we did it. The zip lines ranged from 200-850 metres. After the tour, we went back to the hotel to gather and pack our suitcases to drive to Monteverde. Prior to this, we ate lunch at R.O.W for the last time.

Finally, we drove to Monteverde and visited the town. We bought souvenirs and some of us got food. At the end, we drove to the University of Georgia.

Today we woke up at 6am, and met at the porch of U of G at 6:30. Our group was divided into two, one group preceded to go bird watching and the other group went to milk cows. My group went bird watching. As it was quite a windy morning we sadly only saw a few birds. Both groups met back at the porch at 7:30 for breakfast, after breakfast we were told we had 4 hours to relax and then meet at 12 for lunch. During the 4 hours, most girls took naps and a couple of girls walked around the campus. After lunch we drove to the nature reserve for a hike, our group was once again divided into two, the entire hike took approximately 3 hours, we explored through the forest and learnt about the different birds and other mammals. After the hike we went for ice cream and milkshakes and then back to the campus for dinner at 6.