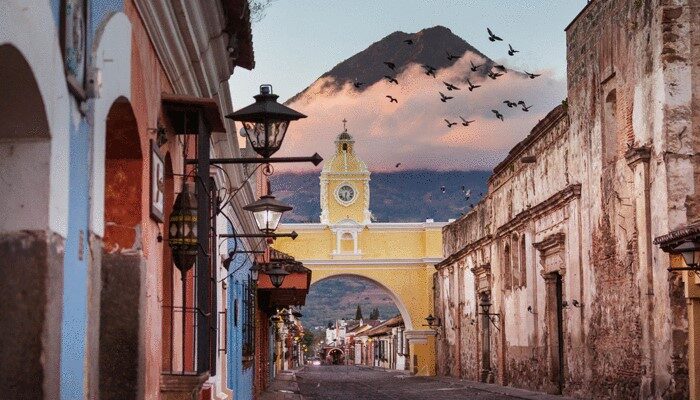 As first-time DWC volunteers, starting out this morning was incredibly exciting. Even though we’d been in Antigua for a couple of days and spent some time and bonded with our team members, we still anticipated that heading out into a village where we would be installing stoves would be an experience like no other.

We picked up our sponsor host, Theresa, and a couple of helping hands and made our way up a washed-out dirt road into the village of Calderas. We passed a garbage dump located up in the mountains that was a combination of burning garbage and salvagers looking for anything of value. It was disturbing and heartbreaking at the same time. The trip took about an hour but that was only because the last passage of road was washed out and eroded from the rainy season and a wrong turn would have put us about 1,000 feet down into nowhere.

We were greeted in Calderas by a host from the village, Angel, who was partnering with Open Windows, and the families in whose homes we would be installing stoves. Angel opened his house to us and guided us around the village. Each family for whom we would be installing stoves had the parts already delivered, which made a huge difference (heavy concrete and clay pieces and bags of gravel). We went right to work, splitting into three groups of four and walking to our first homes.

In our specific case, we first met a mother of six who was living in a small space, approx. 20 feet by 20 feet, with three small buildings. One building had the kitchen with a dirt floor, two corn-stalk-walled rooms and an old tin roof that was falling apart. But the woman happily welcomed us in and proudly showed us how carefully she had stored the new eco-stove parts in her bedroom. They were neatly tucked away under her dresser and beside her bed. The dirt floors posed a challenge for us. Levelling the floor for a stable foundation proved incredibly difficult as we only had a machete, tin snips and the parts for the stove. Like the locals, we had to use what was available to complete our installations.

The woman’s children were beautiful and bright eyed, spilling with curiosity about what four strangers would be doing in their home. When we ran into a minor setback with a missing stove part, they were happy have our attention and play while we waited for a missing piece to be found. The extra few minutes allowed us to learn more of the family’s story, take in more of our surroundings and reflect on how we were making a positive impact.

The second family we met included a young mother with a new baby. She told us she had managed to avoid doing most of the cooking and hadn’t spent a lot of time in heavy smoke. Despite those claims, she still tested very poorly – a product of her upbringing and surroundings, we were told. The family makes 40 quetzals a day. When asked how long it takes to collect firewood,t she said they spend four hours, three times a week to collect wood (two hours there and two hours back). We were told that this is because they ‘trespass’ on properties in another areas or towns so that they are not recognized or not known.

In the third house, we installed two stoves for a gentleman’s two daughters in-law. There were three houses in the compound they shared. We were given warmth and genuine thanks from the whole family for the work we did, which warmed our souls. We returned to Angel’s house on a high note, feeling we really made a difference in others’ lives. It’s a feeling that puts you on such a high that all you want to do is keep giving of yourself to help others.

Thank you Rick, Marianne and DWC for allowing us to take this journey with you, the families of Calderas and our extended team here in Guatemala!