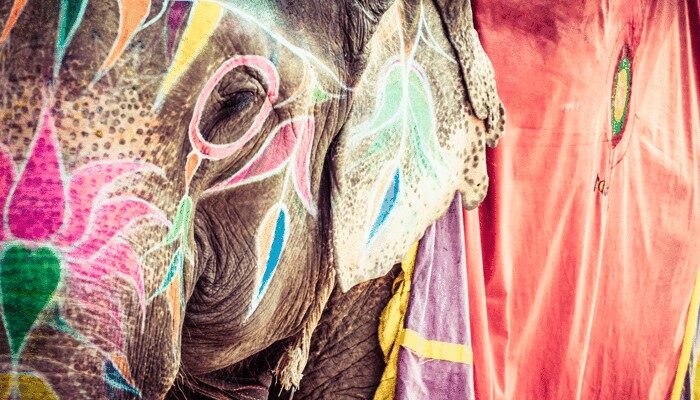 Not surprisingly, we returned to the job site this morning to find that an incredible amount of work had been done over the weekend. The entire length of the wall (27 meters) is now about 0.75 meters above ground. Not only that but the backside of the wall has been reinforced significantly. Where mounds of dirt had sat throughout the past week was now an intricate placement of rock and dirt that will provide extra strength for the wall when the monsoon rains fall. The locals had surely been busy while we enjoyed the sights and sounds of Udaipur.

The vibe at the worksite seemed to be a little more relaxed today. A brief ceremony was held in order to officially welcome Tommy and Denise as new members of the team and they jumped straight into the action. Tommy was keen to cart some heavy rocks and Denise was tossing pans full or mortar with the villagers in no time. We learned that today would only be a half day of work for everyone because a funeral celebration/food exchange was going to be held in the afternoon at a neighbouring village. It being quite a hot day again, none of us were overly disappointed. Well, all of us except Tommy perhaps. Although he was pleased that he was recruited rather quickly to using the stretcher and carrying the big rocks.
It was only a matter of time before the Australian in India was roped into playing cricket, as a group of children from the local village started a game next to the break area at the work site. Although on a rock strewn pitch, the local village children proved their superiority and Dave wasn’t able to uphold the lofty Australian standards of cricket.

Heera came to visit this afternoon at the palace and while the group watched a presentation on the previous water structures that Sahyog had assisted with, I had a chai tea making lesson with the princess. It’s safe to say that if I can find tea powder back home I’ll be making chai tea from now on! Heera informed us that a celebration will be held this coming Wednesday with over 200 participants. Essentially everyone who is impacted in some way by the creation of our water harvesting structure has been invited to partake. Put your party hats on!

With this in mind we set out to find a small gift we could bring for the 60+ children who are expected to be in attendance. We settled on purchasing a pencil, eraser, sharpener and notebook each for the kids. Hopefully it’ll be something they can all put to good use.
Anya Malda DWC Participant  Udaipur, India: Oct 2014