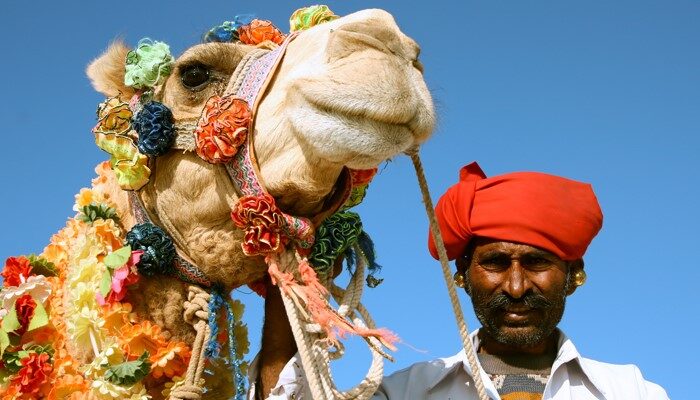 In the southeast corner of Rajasthan lies the town of Bhinder, home to some 30, 000 people. The town is made up of a mix of Hindu, Muslim and tribal people. In the center of town is a 600-year-old palace. It has been converted into a historic hotel, the Raj Mahal Bhinder, with 25 rooms, each with a Western style bathroom. It is here the group of eight stayed and traveled from each morning to the project site.

Most days, we came back for lunch, a short rest and then there was free time or travel to visit different families homes. We were welcomed into the villagers’ homes and they appeared to be so excited, we saw handmade mills stones, the freezer, the dairy owner, we played with children and Trudie did a bit of sewing. Jeff played tic-tac-toe with some school boys and Erin and I held hands with our newfound women friends.

We saw the village school that has 127 students up until the eighth class. Across the dirt road is a preschool with 20 children under five. We visited completed Sayhog projects like the Cclimate change project and the biodiversity project. Several other villages have been self-sufficient since Sayhog assisted them with water harvesting structures, better breeds of animals and expertise.

We heard about the success of this particular village since 2005 and saw the difference in the landscape from where there is water and where there is little. The children appear healthier, the community is proud and because of the philosophy of Sayhog, is invested in its own success.

Sahyog started working with this village in 2001 and they have been self sufficient since 2005. They talked about the creation and success of self help groups, how each member contributes a certain amount, as decided by the group, and then if and when they need a loan, they borrow from themselves with a much lower interest rate – 10 to 20% instead of from other private lenders at 60 to 70%.

There were some fabulous photos taken and more chai was drunk. Heera Lal, Sayhog secretary, was an excellent tour guide and project manager. From this village we went back to Bhinder. On the way, the small car Pablo was riding in had a flat tire, so we didn’t get back to the hotel until 7 p.m. with 30 minutes to wash up, everyone was beat but the show must go on and so a group of tribal and farmer men came to the hotel and preformed puja, ate and then sang many songs to Shiva and danced. This is was one of the most fabulous evenings during the two weeks. To see them sing and dance, and enjoy themselves it was a beautiful evening.

The food was amazing! The town of Bhinder friendly and safe. The villagers we worked with were friendly and curious and generous. It has been an amazing experience, full of connections with the people, an education and an opportunity for sharing.