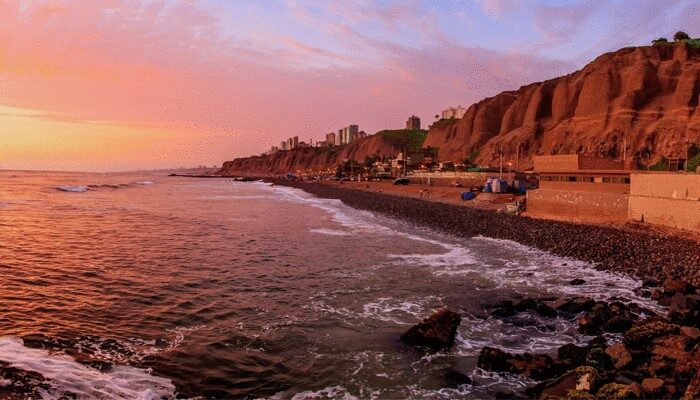 November 24th, 2019
And so the journey begins… The entire team made it safe into Lima, arriving at different hours of the day. Some folks came in a few days earlier even, to get some sightseeing done in Miraflores and Barranco before the real work begins. We all got together for the first time at noon at the Hotel dining room, where Josh, our DWC team leader gave us a rundown of what we can expect in the next few days. We had a great welcome lunch and headed to the City’s centre to check out some of the historic sites, guided by Javier, our official translator/tour guide.
We got our first real taste of Peruvian life by taking the bus to the historic centre. The bus system is actually quite organized and consists of long articulated buses with their own dedicated lanes and transfer stations, similar to what an overland train/metro system would be. It as a gruelling bus ride, packed to the brim, but enjoyable nonetheless.
Because some of us hadn’t gotten a chance to exchange dollars to soles, we had to find a currency exchange spot. Fortunately, there are a few local government representatives in yellow vests walking around the streets of the Historic Centre with wads of cash exchanging currency with unprepared tourists like us. If this sounds sketchy, it’s because it is. It felt a bit like a drug deal going down in the middle of the street, except there was police all around us, so it felt safe.
The historic centre of Lima is impressive, to say the least. It has an enormous central plaza surrounded old buildings, some of them dating back 250 years or more. The presidential palace and the main cathedral were among the two most impressive structures, with intricate Spanish and colonial style architecture. In the plaza, we encountered a group of young high school students whose assignment for English class was to approach and interview some English-speaking tourists. So, Taryn, Grace and Josh generously obliged.

Everyone kept hearing about Peru’s liquor delicacy: the Pisco. Pisco is a grape-based liquor typically prepared with egg whites and lemon juice. So to satisfy everyone’s curiosity we stopped at the Pisco Museum, which is tucked away in a corner of the plaza. This was an interesting experience, to say the least, as we all got to share ten different flavours of Pisco by passing around each glass so we could all have a sip. There’s probably no better way to get to know your fellow team mates than by sharing some alcohol from the same glass. Talk about your ice breaker!
The other amazing historic site we visited was a Franciscan church with some impressive catacombs; thousands of human remains arranged in the most intricate patterns. Unfortunately, no pictures are allowed inside. It was a 45-minute tour that took us through the entire Franciscan experience and the local efforts for conservation and restoration of hundreds of years of history. Back to the hotel, for dinner and some rest. Tomorrow, the real work begins.

Today was day two at the school site.  One of the teams departed early to help with the bus pick-up program and another team left at 7:15 am and headed to the site.  It was our day to do the 7:15 am which go us caught up in the worst traffic we have seen with lots of honking and everyone try to get to where they were doing.  The bus driver is amazingly patient.

Once we got to the site we were organized into our groups with some helping with a food kiosk where the kids are taught to run a small business of preparing and selling treats that are sold at the kiosk for a profit.  What an amazing program aimed at teaching entrepreneurial skills.

Kris delivered a presentation to a class and spoke about life in Canada that was well received.  The kids are quite interested in snow and loved to see the pictures that Kris shares.
A number of us kept working on breaking down the rock bluff to make room for a bathroom and a staircase for the second floor classroom that we are also working on.  We bend rebar and used tie wire to tie the rebar columns in prep for pouring the concrete which may happen later this week.  That will be an exciting step.

A couple of the ladies took a break and played basketball with the kids in the concrete sport court.  It was great they Jessica, Tricia and Jaime took that time with the kids.  The kids seemed to love playing with them.

Today, Jaime, Tricia, Tarryn and I went with our interpreter and another leader to visit a family at their home.  The 8 yr old boy Jose was proud to host us at his house and told us all about what he wants do when he grows up which was an inventor or a metal head.  May he could do both?  It was very interesting to gain some perspective on their normal living conditions which would be equivalent to a large shed with a concrete floor at home with a single living area, outhouse toilet, fridge, tv, and other basic necessities.

Their mom was cooking outside on a fire since they had run out of gas for cooking.  We met Jose’s Mom, 4 yr old brother and 2 yr old daughter, and their two dogs and three kittens.  It was a busy little house in a very dusty area with a water tank at the street with garden hose for running water. We brought pencil crayons and diapers to help out a bit. When we said good by, we took a very bumpy ride and a very crowded bus back to the school site before heading back through the traffic to our hotel in Mira Flores.  It is an stark contrast between the community by the school and the Mira Flores are which rivals many nice cities in Canada.

Today was our fourth day at the school. At the rise of dawn, some of us ladies went on an early morning bus ride to pick up the kids. We got the see some local places as we spent time with the kids. Others were helping with the food program and got to make the kids delicious breakfasts.  We all got to meet cool kids and experience life in Lima Peru.

We finished the last couple columns for the second floor of a classroom, as others continued the demolish the rock wall. Some of our team went to buy some supplies for the school including, chairs, tables, first aid supplies and sports equipment.  We cleaned out the bottom classroom and moved the bricks from the bottom floor to the top.  This was taking steps towards the start of the next project.

After an amazing lunch Taryn and I help the kids with some decorating for the festival.  We helped them put together posters and games for the next day. All the kids were excited about the festival. They couldn’t wait to teach us lots of fun games!